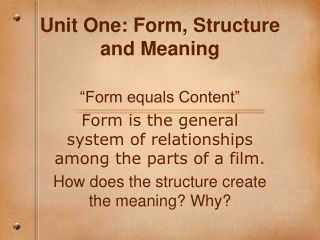 Unit One: Form, Structure and Meaning. “Form equals Content” Form is the general system of relationships among the parts of a film. How does the structure create the meaning? Why?. It all comes down to story/screenplay. The most important element in the film is the story. Semantics - . going beyond syntax. semantics. relationship between surface form and meaning what is meaning? lexical

Morphology - “. “. morphology. morphology. the most minimal unit of a word. morpheme &gt; the abstract/ideal form

The approach recognizes requirements in the form of Group entrepreneurship, comprising of Artisans Agricultural Labo

Unit One: Form, Structure and Meaning - . “form equals content” form is the general system of relationships among the

Atomic Structure - . spectra of science miss amole. by presentermedia.com. what is an atom?. simplest unit in an element

Important Definitions - . lexeme : a basic lexical unit of a language consisting of one word or several words, the

Becoming the Archetype - . archetypes in american literature . what the heck is an archetype?. the word archetype comes

EQ: How does an author's use of sentence structure impact the meaning of the text? - Standard: elacc6l3a vary sentence

Morphology - . the structure of words. morphemes. defined as, “a minimal unit of meaning” not the same as a syllable,

Linguistic Theory - . lecture 2 phrase structure. what was there before structure?. classical studies: languages such as

Aspects of Language - According to linguists, there are three key aspects of language: form meaning use. aspects of

Lecture 16 - . representations of meaning. what do we mean by ‘meaning’?. so far, we have focused on the structure of

Unit 2 Atomic Structure - . warm up. the model above shows two continental plates . the folded mountains in this model