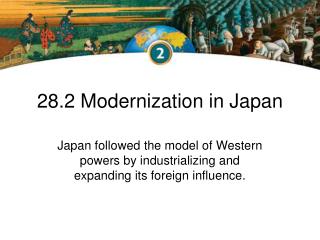 28.2 Modernization in Japan. Japan followed the model of Western powers by industrializing and expanding its foreign influence. Japan Ends Its Isolation. Japan had little contact with the industrialized world during its isolation. Japan did trade with the Dutch from Indonesia, and the Chinese. Modernization and Transformation of Japan - . overview of the political, social, economic and cultural conditions in the

28.2 Modernization in Japan - . japan followed the model of western powers by industrializing and expanding its foreign

Warmup : 2/ 28 - . in your spiral notebooks: 1. what are some stereotypical labels used at river hill to describe other

GEOPOLITICS 2/28 - . bell-ringer: analyze this quote – what does it mean? “the world-economy is more than the sum

Modernization - . what is modernization?. process by which a society’s social institutions become increasingly complex

Modernization - . the impact of modernity on economy “that institution in society that arranges for the production and

Modernization of Japan Time Line - China resists outside influence create this chart in your notebook in your group, use

MODERNIZATION IN JAPAN - . 1853 - matthew perry arrives in tokyo harbor. what was the american motive in sending in the