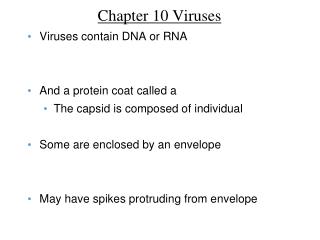 Chapter 10 Viruses. Viruses contain DNA or RNA And a protein coat called a The capsid is composed of individual Some are enclosed by an envelope May have spikes protruding from envelope . Most viruses infect only specific types of cells in one host Chapter 10 VIRUSES - . scientists grow human muscle that contracts like the real thing in what's being hailed as a

Chapter 10 Viruses - . viruses contain dna or rna and a protein coat called a the capsid is composed of individual some

Chapter 17: Viruses - . following the big ideas evolution- – changes in dna can lead to phenotypic variation which

Chapter 6 - Viruses - . obligate intracellular parasites – only demonstrate characteristics of life while “inside”

Chapter 20.1 - Viruses - . part 1 – virus structure and function. the discovery of viruses. scientists were looking for

Chapter 19: Viruses - . essential knowledge. 3.a.1 – dna, and in some cases rna, is the primary source of heritable

10 Worst Computer Viruses - Different viruses released with different malware intensions, out of which following are the

Chapter Viruses Ch 19 - Get a half sheet of paper out, number 1-5. you are taking an assessment on the disease gizmo from