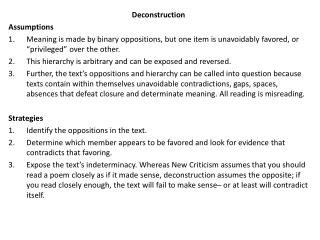 Deconstruction Assumptions Meaning is made by binary oppositions, but one item is unavoidably favored, or “privileged” over the other. This hierarchy is arbitrary and can be exposed and reversed. Modigliani &amp; Miller + WACC - . m&amp;m: the starting point. a number of restrictive assumptions apply use the

“Deconstruction and Hamlet ” and “Giving up the Ghost” - . kelsey teeters, rebecca fahrni, brittany sant and

TEAC8 - . april 12, 2002 radisson hotel marlborough, massachusetts certain maps and diagrams have been removed from this

Paradigms in Abnormal Psychology - Influential paradigms in abnormal psychology. what is a paradigm? a ... a set of

exploring myths about nutrition and pregnancy outcome - Past: information on pregnancy and nutrition based on clinical