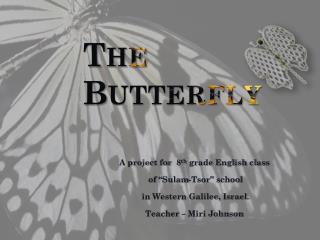 The Butterfly. A project for 8 th grade English class of “ Sulam - Tsor ” school in Western Galilee, Israel. Teacher – Miri Johnson. Butterfly. The Butterfly . The last, the very last, So richly, brightly, dazzlingly yellow . Perhaps if the sun’s tears would sing

The Butterfly Story - . by paige utley. learning outcomes. this slideshow was made to teach you about how butterflies

THE BUTTERFLY - . rama-rama. dan bunga. and the flower. once there was a man who asked allah for seorang lelaki berdoa

When to use the butterfly - . by coach tim. brief history. glenn hall benoit allaire modern day butterfly. components to

THE BUTTERFLY LIFECYCLE - . butterflies lay their eggs on the leaves of plants and trees. after about 10 days, the eggs

THE BUTTERFLY - . and the flower. once there was a man who asked allah for. a flower. ....and a butterfly. but instead

Life Cycle of the Butterfly - . by david g. estes. 4 stages of the life cycle. life cycle stages. egg. eggs are laid by

“Day of the Butterfly” - . alice munro. pre-reading questions: choose one to answer in your lit circle journal . why

The Butterfly Lovers 梁祝 Liáng Zh ù ( - The legend has been handed down over a thousand years. among various

The Butterfly Song - . the first stage of the butterfly is the egg. the second stage is the caterpillar larva. the third

BUTTERFLY’S - . by: yajaira, rosa and victoria. the importance of butterflies. one amusing fact about the butterfly is

THE BUTTERFLY - . and the flower. once there was a man who asked god for. a flower. ....and a butterfly. but instead god

Interesting and fun facts about butterflies! - . stages in the butterfly’s life. the butterfly's life cycle has 4