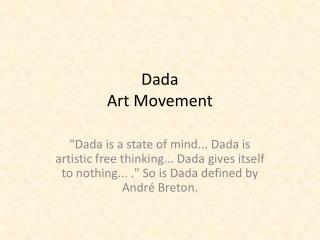 Dada Art Movement. "Dada is a state of mind... Dada is artistic free thinking... Dada gives itself to nothing... ." So is Dada defined by André Breton. . The beginnings of Dada. The artists and writers of the time were dismayed by the stupidity and horror of WWI. DADA… the “NOT Art” Movement - . a “definition” of dada -. an early twentieth century art movement which

Dada: Art and Anti-Art - . “i am neither for nor against and i do not explain because i hate common sense.” tristan

Modern Art Movement - . 1870-1970. art movements. an art movement is a style in art with a specific common goal, followed

Galerie Dada: Offering the Best Art Reproductions - The best thing about galerie dada is that since they are selling the