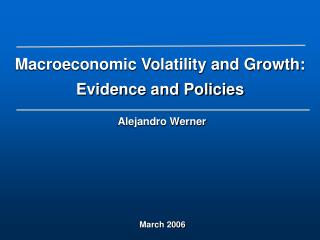 Macroeconomic Volatility and Growth: Evidence and Policies. Alejandro Werner. March 2006. Macroeconomic volatility in Latin America has been relatively high. Evidence suggests that this has been a negative factor for growth in the region. Per Capita GDP Growth Volatility FIN 30220: Macroeconomic Analysis - . money, output, and prices. what is money?. any commodity that satisfies three basic