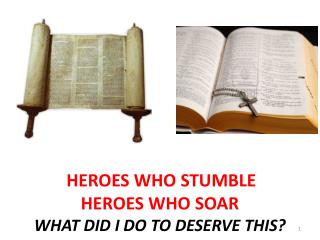 HEROES WHO STUMBLE HEROES WHO SOAR WHAT DID I DO TO DESERVE THIS?. Uniworld River Victoria with Tom O’Brien & Rabbi Howard Shapiro September 26 th to October 8 th Sailing from St. Petersburg to Moscow. Interfaith Russian River Cruise. Dr. Schiller: AP History of Art GARDNER 11th: Art through the Ages - . chapter 4: aegean art: minos and the heroes of

1 st Lt. Louis E. Allen Army NG - In a long line of heroes stretching from the greens of lexington and concord to the

Teaching Ethics through the Justice League - . character education. what values do students need to be heroes? how can we

SOAR Student Orientation Advising and Resources - . july 25, 2008. rocks in a jar. why are you coming to college?. get

Heresies and Heroes - . chris parsons nlc 2011. three views on history. “ there is nothing new under the sun ”

Gardner’s Art Through the Ages, 12e - . chapter 4 minos and the heroes of homer: the art of the prehistoric aegean. the

By: John Livingston - Olympic heroes. by: john livingston. begin. controlling this lesson. this button will take you to

“FICTIONAL HEROES NEVER DIE!” - . “ real heroes are only human. they lived and die like the rest of us. but