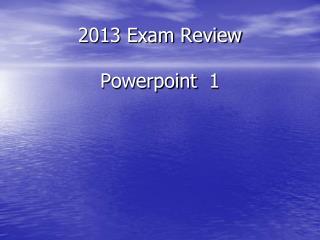 2013 Exam Review. Powerpoint 1. Why do we study mythology?. To recognize allusions in literature and in everyday life. What are the characteristics of an epic?. A physically impressive hero A journey or quest for something of value Evidence of supernatural forces at work A vast setting Social Studies Final Exam Review ( 2013 ) - . 1. how are christianity, judaism, and islam similar? are they monotheistic

Fall 2013 – Honors Final Exam Review - . all of the information for the study guide is not included in this ppt. you