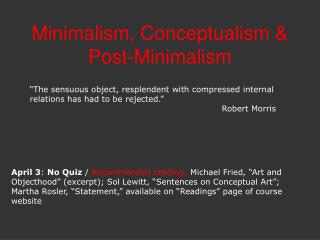 Minimalism, Conceptualism & Post-Minimalism. “The sensuous object, resplendent with compressed internal relations has had to be rejected.” Robert Morris.

BERKELEY AND IDEALISM - . strange to claim there is an external world; inconceivable that mind independent matter causes

Minimalism - . minimalism rejected illusionism, and wanted the viewer to focus on what work of art was presently in front

Minimalism - . the materials of minimalism. moma minimalism theme. what are characteristics that untitled (stack) shares

Minimalism - . rebecca &amp; troy. about the movement. this movement was during the late 1950’s to the early

About Society: Mona Hatoum - . 5w1h. when born in 1952 beirut, lebanon. how uses ‘assisted readymades’. where lives