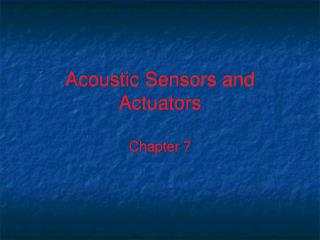 Role of MEMS in sensors - . first things first, what is a sensor ?. a device used to measure a physical quantity such as

Actuators - . actuators. hardware devices that convert a controller command signal into a change in a physical parameter

SENSORS AND TRANSDUCERS - . intro. sensors – the term sensor is used for an element which generates a signal which is

Introduction to Sensors - . or, how the world gets into our programs. mechatronic systems. microcontroller. decision