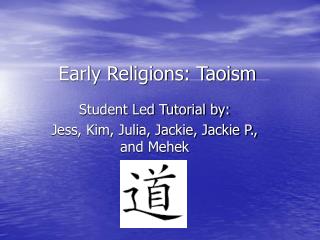 Bell-Ringer, September 18th - . in your journal, please respond to yesterday’s eq in 3-5 sentences: how were the 13

Taoism - . scriptures. contrary to the popular opinion, the earliest taoist scripture is not lao-tzu’s text the tao te

TAOISM - Apwh religions project melissa milstrey, brandon rothrock , and matt mcanally. taoism . “when there is this

The Rise of Christianity - . objectives: what were the main causes for the spread of christianity in the roman world?

1. Taoism (Daoism) - . be like water : flow smoothly around obstacles rather than bumping up against them adapt yourself

World Religions - . islam. who was muhammad?. early life - born in the oasis town of mecca around a.d. 570. arabia’s

China - . by mitchell cann. map of china. language. in china they speak chinese. duh…. religions. in china there is