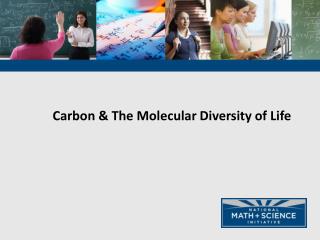 Carbon & The Molecular Diversity of Life

Carbon & The Molecular Diversity of Life. Carbon: The Backbone of Life. Living organisms consist mostly of carbon-based compounds Carbon is unparalleled in its ability to form large, complex, and diverse molecules

Carbon & The Molecular Diversity of Life

Carbon Cycle - . carbon cycle. the carbon cycle is a biogeochemical cycle in which carbon is cycled throughout the earth.

Carbon Cycle - . the carbon cycle is the circulation and transformation of carbon back and forth between living things

CARBON CYCLE AND THE Human Impact on the Environment - . what the humans don’t want you to know!. carbon cycle.

carbon is a Group 14 element and is distributed very widely in nature. Clint Sanderson - Carbon. carbon is a group 14

Carbon Cycle - . carbon is found as graphite and diamond in nature, it also occurs as carbon dioxide ( 0.03% v/v ) in the

Carbon - . the allotropes. diamond – a shiny, clear and hard material often used to tip drills and for jewellery as it

The Carbon Cycle - . the carbon cycle is the movement of carbon from the nonliving environment into living things and

Amazing World of Carbon Compounds - . introduction. at the beginning of 19 th century organic compounds were defined as