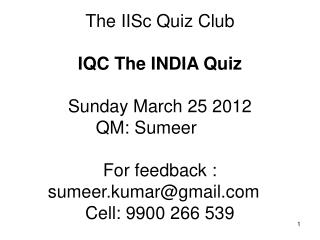 The IISc Quiz Club IQC The INDIA Quiz Sunday March 25 2012 QM: Sumeer For feedback : sumeer.kumar@gmail.com Cell: 9900 266 539. About Clues. Most questions carry some clue(s). Clue(s) will be provided only as long as no team has an objection . Roll Back the Years You Want With Best Cosmetic Surgeon in Hyderabad - With the latest advancements in the medical field, How TV’s Bahu Look Off-Screen In Designer Dresses For Women? - You must have purchased fashionable women kurtis and

Top 10 Famous Food Corners of Delhi - Delhi is famous for its legacy of culture and tradition. these belong to mughal

Test Yourself… how well do you know the Cell Unit for the Quiz? - . you need a piece of paper and a pencil… number First Sunday of Lent - . jesus, full of the holy spirit, returned from the jordan and was led by the spirit in the

The following schools had at least one person from their team score 100% on their quiz! - West high school george

SANSKRIT DAY- 20 TH AUGUST 2013 - . the full moon day of the shravan month is observed to be sanskrit day in india.