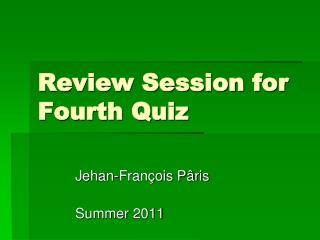 FOURTH SESSION - . listening practice. word order. you. lesson vi. teacher?. page. 28. are. a. point out the order for

Review for Quiz - . ratio, rates, proportions and percents. find the constant proportionality of this graph. write the

Review for quiz - . a. f. d. compare and contrast incenter and circumcenter name the point that circumscribes triangle

REVIEW FOR QUIZ - . part 1 review omm. a. what characteristics are common to all living

Review for Quiz - . the quiz will cover three short stories read in class. the lottery- shirley jackson lather and

Review for Quiz - . 22a, 22b, cotton kingdom, mill times. this was trading of slaves within the united states. slave

Review for quiz - . review game rules. i will call up one student from each side (left side and right side) to answer

Quick Review for Quiz - . get notes out and study for 5 minutes! hint: what were the words to remember??. di. sp. lac.

REVIEW FOR THE QUIZ - . please write the answers down as we go through the questions. please get everything off your desk

Review for Adverb Quiz - . practice all questions!. 1. which word in the sentence below is an adverb?. after handing in