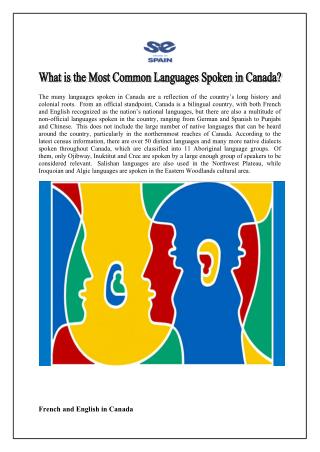 The many languages spoken in Canada are a reflection of the country’s long history and colonial roots. From an official standpoint, Canada is a bilingual country, with both French and English recognized as the nation’s national languages, but there are also a multitude of non-official languages spoken in the country, ranging from German and Spanish to Punjabi and Chinese. This does not include the large number of native languages that can be heard around the country, particularly in the northernmost reaches of Canada. According to the latest census information, there are over 50 distinct languages and many more native dialects spoken throughout Canada, which are classified into 11 Aboriginal language groups. Of them, only Ojibway, Inuktitut and Cree are spoken by a large enough group of speakers to be considered relevant. Salishan languages are also used in the Northwest Plateau, while Iroquoian and Algic languages are spoken in the Eastern Woodlands cultural area. Fizzbuzzalooza - Presented at accu (25th april 2015) fizz buzz. it's a drinking game. it's an educational game to teach

Conversation analysis and the structure of spoken English - . we have seen the general features of spoken vs. written

English and tone languages - . john goldsmith. english as a tone language. some basics about language and speech tone