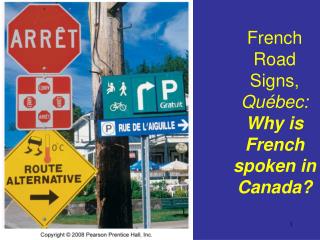 French Road Signs, Québec: Why is French spoken in Canada?. English Speaking Countries. Fig. 5-1: English is the official language in 42 countries, including some in which it is not the most widely spoken language. It’s also used & understood in many others. Some important terms to know: French - 2. french in the world. french is a romance

Why learn FRENCH ? - . … some facts and figures …. did you know french is a world language ?. some figures. in the

The Establishment of (French) Canada - . four themes. french pattern of diversity versus centralization [wars of

Why Learn French? - . by: dan russell. pilot. as a pilot i could go anywhere in the world. although english is the main

French - . by: jamie courtier. flag . the flag represent this country. it is backwards from are flag. . type of

Why French? - . culture / prestige. from 17th century to the mid 20th century, french was the pre-eminent international

Why learn French? - . it is an official language in 29 countries , most of which form what is called, in french, la

French and English Canada - . instructions. - form a group of 3-4 students. - use gateway to canada to answer the 12

French - . in french we are doing lots of words. some of these words are big and some are small. the last unit was on la

French Immersion is… - . a program designed specifically for students who do not speak french at home a long term