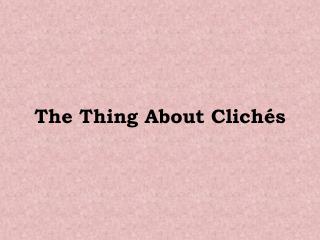 The Thing About Clichés . Cliché: a trite, stereotyped expression; a sentence or phrase, usually expressing a popular or common thought or idea that has lost originality, ingenuity, and impact by long overuse, as sadder but wiser, or strong as an ox . Hip Hop - . for youth leaders. hip-hop. a black thing? an urban thing? a commercial thing? a white thing? a global

SYNONYMS - . by connie ochsner. what is a synonym?. a synonym is a word that means the same or about the same thing as

What job do these people do? Would you like to do this? What is the best thing about this job? - What is the worst thing

Stereotype and the Ethics of Representation - . david steiling ringling school of art. stereotype and clich é. both

I s this true? Is the right thing to do always the most loving thing ? - Give an example to back up your point.

What do women want? THE RIGHT TO VOTE! - . “in any moment of decision, the best thing you can do is the right thing,

SCAMPER - . images of imagination and innovation. substitute. one thing replaces another thing. a starbucks manager

How to Describe a Thing …Ask Yourself: What kind of thing is it? - What is it used for? or what is its purpose? or

One Thing - . charlie hall. single minded, whole hearted one thing i ask. that i may gaze upon your beauty, o lord that i

The Key To Abundant Kingdom Living - . our lives are out of alignment because we are focused on possessions rather than