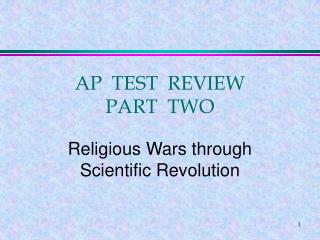 AP TEST REVIEW PART TWO. Religious Wars through Scientific Revolution. The Invasions of Italy. The Italian city-states were attractive to invaders for several reasons: They were wealthy territories which were a tempting target for stronger powers

Chapter 1 Test Review - . which of the following statements best describes georgia's population growth?. one of the ten

Final Test Review 2014 - . in regards to a motion graph, what does a horizontal line indicate? . no motion or at rest. in

Romeo &amp; Juliet Test Review - . break into 5 groups. each group will get a chance to answer 10 questions. each

AP Biology Exam Review Put Your Knowledge to the Test - . enter the game. how to play. how this works. read the question