How far are you willing to obey? - PowerPoint PPT Presentation 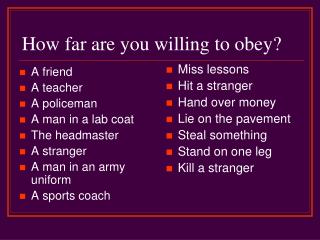 How far are you willing to obey?

1 / 28
Download Presentation
How far are you willing to obey?
124 Views

Miss lessons Hit a stranger Hand over money Lie on the pavement Steal something Stand on one leg Kill a stranger. A friend A teacher A policeman A man in a lab coat The headmaster A stranger A man in an army uniform A sports coach. How far are you willing to obey?. Obedience.

How far are you willing to obey?

Behold, a Stranger at the door! He gently knocks, has knocked before, - Has waited long, is waiting still; you treat no

Conformity and Obedience to Authority - . what is conformity?. quick write: 5

JESUS’ LOVE LANGUAGE - . “if you love me you will obey my commandments” john 14:15. jesus’ love language.

‘A Stranger in a Strange Land’* - . issues and challenges in crossing academic and cultural borders * title of book

Listen and obey - . three in one  repent!  be baptized!  receive the holy spirit because you say so: luke 5.1-11

Social Influence - . social influence. how do we influence each other? how are we affected by pressures to conform and

Nature of Obedience - . what is obedience?. social influence – following direct instructions from a figure perceived to

Dear Mrs.LaRue - . genre: fantasy -a story about characters and setting that could not exist in real life. *obedience.

Habakkuk 1 Hello God, can you please answer ? - . habakkuk 1 – “ 1 the oracle that habakkuk the prophet received.

A Willing Heart - . and moses spoke to all the congregation of the children of israel, saying, “this is the thing which