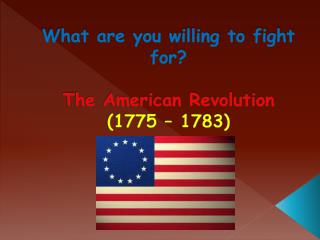 What are you willing to fight for? The American Revolution (1775 – 1783) - PowerPoint PPT Presentation What are you willing to fight for? The American Revolution (1775 – 1783). The People Involved:. English – Many opposed the war. Soldiers = Low pay/ low will to fight Patriots - Believed in the cause; would die for freedom Weak army and high desertion rates Tories – Loyalists to England

Latin American Independence - Why did the creoles lead the fight?. latin american independence. to remember when writing

Do Now - . take a notecard from the front table. on one side, write one thing you know about the american revolution and

The American and French Revolutions - The causes of, key people in , and common outcomes of revolutionary activities. .

Age of Exploration Commercial Revolution New Monarchies - . true of false?. 50% of foods we eat today were of american