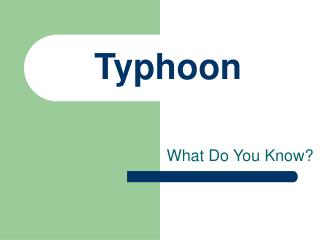 Typhoon Haiyan - . the destruction, the response and recovery. on friday 8 th of november 2013, an uncharacteristically

Typhoon Haiyan - A massive typhoon, reported as one of the strongest storms on record this year,the storm packed

Typhoon Dynamics - . roger k. smith university of munich. aim to review some of the fundamental processes involved in

Typhoon Haiyan - . on friday, november 8, 2013, one of the worst typhoons ever slammed into the philippines. haiyan

Typhoon Haiyan - . by aza , nathan and luke. what is a