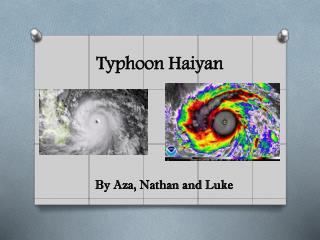 Typhoon Haiyan. By Aza , Nathan and Luke. WHAT IS A TYPHOON?. Man vs. typhoon - The force of nature meets the stubbornness of

Typhoon Haiyan Disaster - . by danae rivadera and emma mahar. what is a typhoon?. a typhoon is a type of large storm

Typhoon Haiyan - . how can we help those effected by this natural disaster? if you or your family have been effected by

Typhoon Haiyan Disaster - . by meg, brooke j, brooke r. when and where did it occur?. the super typhoon hit the

Typhoon Project - . by: enrique mayan and erik arias. science 4 mr. fraser. what is a

Typhoon Haiyan - . by: dhafne rendon &amp; aremy avalos per. 3 sci. what is a typhoon?. a typhoon is a tropical storm

Typhoon Haiyan (Yolanda) Disaster Report - . by james quinn 9h. when and where did it