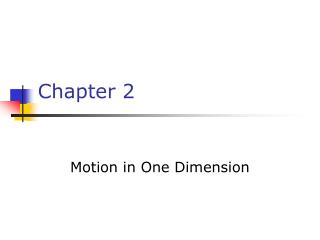 Chapter 2. Motion in One Dimension. Quantities in Motion. Any motion involves three concepts Displacement Velocity Acceleration These concepts can be used to study objects in motion. Position. Defined in terms of a frame of reference One dimensional, so generally the x- or y-axis