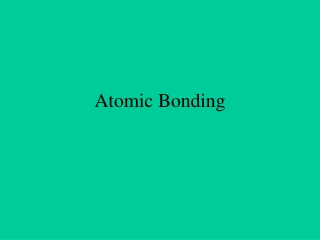 Atomic Bonding. Quick Tip. Any slides that appear in this pattern are the slides you need to copy in your notes (Cornell note style). Any text that is italicized is important and should be written down in your notes. All other slides and text, do not need to be written down . Bonding - . chemistry revision. there are two types of bonding you need to be familiar with…. covalent bonding ionic

Using the cards – Match up the element’s symbol with its atomic structure - . btec -working towards . ionic bonding

Objective: I will distinguish between an ionic radius and an atomic radius. - Unit 6: atomic hookups: chemical bonding.

Atomic structure and chemical bonding - . do now. take out your binder and a pen let’s get in the habit of doing this