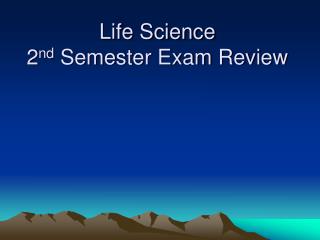 Life Science 2 nd Semester Exam Review. Basic Concepts. Structure of Ecosystems/Levels of Organization. Organism – individual living (biotic) thing Population – group of organisms, all of one species, which live in the same place and the same time

Biology Review Semester 1 - . smithers thinks that a special juice will increase the productivity of workers. he creates

Semester 1 AP BIOLOGY REVIEW - . this is helpful for you to review semester 1. there is a power point handout that goes

8th Grade Semester Exam - . observation. observation - recognizing and noting some fact to gather information about the