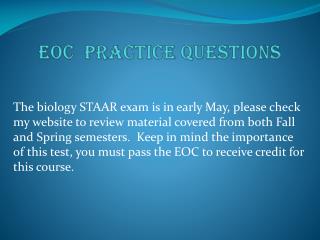 EOC Practice Questions. The biology STAAR exam is in early May, please check my website to review material covered from both Fall and Spring semesters. Keep in mind the importance of this test, you must pass the EOC to receive credit for this course.

Algebra EOC Practice - . week 1. each of the questions come from reporting category 1: functions, linear equations, and

EOC Practice Judicial 3 - . eoc judicial . the supreme court ruled that an indigent defendant in a criminal trial has a

EOC PRACTICE QUESTIONS #2 - . bio 3.1 - explain how traits are determined by the structure and function of dna. . dna

EOC Practice - . grammar 1. on her way home, jan found a gold man's watch. what needs to be changed to make this sentence