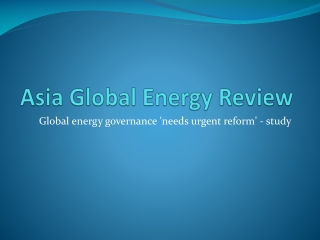 The world badly needs secure energy supplies and a stable climate. But the international mechanisms regulating how energy is exploited and shared belong to another era, analysts say. ASIA GLOBAL ENERGY REVIEW - Check out how our global energy - We live in interesting times. our world civilisation is

global asia energy-ENER-G - Up to 3.8 mw of electricity will be generated by three uk landfill sites following a

East Asia Review - . these are questions regarding china, korea and japan from the 1998-2008 regents. question 1. in

Energy Review - . test wednesday, may 2. what are the units of energy ? joules 2. the kinetic energy of an object