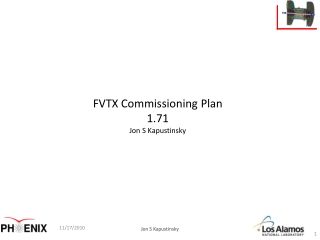 Plan Flagged by Jon - . after the colloquium, there will be a joint nstx-u/diii-d meeting to discuss possible means of

Commissioning plan 2014/19 - . the nhs belongs to the people: a call to action. healthcare is changing health is changing

FVTX LL1 - . what should an fvtx ll1 do? goals of an fvtx ll1 relationship to the forward muon trigger upgrade the