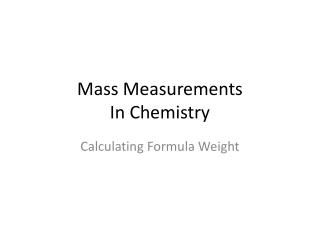 Mass Measurements In Chemistry. Calculating Formula Weight. I CAN calculate the formula weight (molar mass) of a compound from it’s formula. We’ve talked about the mass of atoms in terms of one or two….but these masses are very small .

The Mole, Stoichiometry , and Solution Chemistry - . h chemistry i unit 8. objectives #1-4 the mole and its use in

reintroduction to Chemistry - . matter: anything that has mass and volume. states of matter. physical changes. boiling