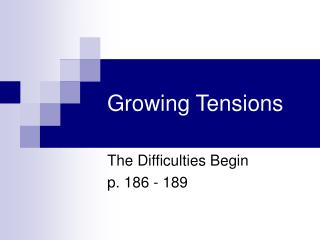 Causes of the War for Independence - . growing tensions. by the 1820s, anglo american settlers in texas were becoming

Growing Tensions Between Colonies and Britain - . french and indian war. britain and france claimed land in the ohio

4.3 Slavery in the Colonies - . the atlantic s lave trade. more than 10 million africans were transported across the

Growing Tensions Over Slavery - . eq1: how did the question of the admission of new states to the union fuel the debate

10- 1 : Growing Tensions Over Slavery - . the admission of new states to the union threatened to upset the balance

Embracing Our Differences 2013 - . &quot;the real beauty of art is the ability to create multiple interpretations of