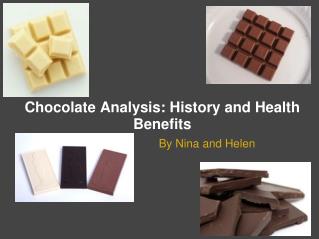 Chocolate Analysis: History and Health Benefits. By Nina and Helen. A Brief History. 90 percent of chocolate's long history, it was strictly a beverage, and sugar didn't have anything to do with it. An Invitation to Health - Chapter 5: the joy of fitness prepared by: andrew owusu ph.d. chapter 5 objectives list the

20th Century US History - . what is history ? history is nothing more than the analysis and study of the consequences of