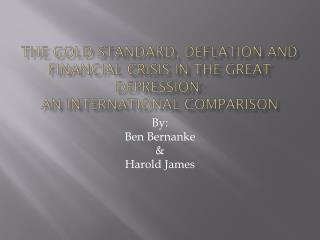 The Gold Standard, deflation and financial crisis in the great depression: an international comparison. By: Ben Bernanke & Harold James. ABSTRACT.

JAMES JOYCE’S “ULYSSES” - . by venturini chiara. why is joyce’s novel named “ ulysses ”?. as suggested by the

LeBron James - . by devin mollander. bio. born lebron raymone james on dec. 30 1984. born to gloria james when she was