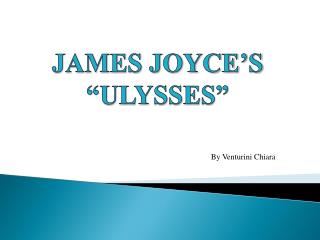 JAMES JOYCE’S “ULYSSES”. By Venturini Chiara. WHY IS JOYCE’S NOVEL NAMED “ ULYSSES ”?. As suggested by the title, “ Ulysses ” by Joyce is related to Homer’s epic, which is about Odysseus and his travels after the Troian war. “The Tail” by Joyce Hansen - . choose one word which best describes junior. there is more than one correct answer.

LeBron James - . by devin mollander. bio. born lebron raymone james on dec. 30 1984. born to gloria james when she was