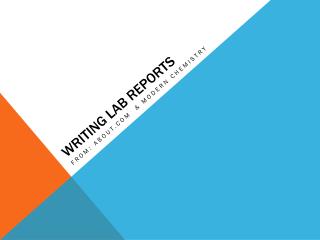 WRITING LAB REPORTS. FROM: ABOUT.COM & MODERN CHEMISTRY. EXPERIMENT NUMBER & TITLE. The title says what you did It should be brief (aim for ten words or less) and describe the main point of the experiment or investigation LAB REPORTS SCIENCE WRITING HEURISTIC - What is science writing heuristic? it is a process incorporating collaborative

Tips for Writing Lab Reports - . lab reports should be stand-alone documents . you should not staple the lab handout to

Review of Writing for Lab Reports - . 2011. pre-quiz (part 1). which of these sentences is written in the correct format

LAB REPORTS - . a quick synopsis. every report must say…. who – who wrote it, for whom it was written what –

Lab Reports - . things to remember…. label what the calculations are for watch sig figs include qualitative data

First lab reports - . grading explanation of “soft windows” in upper right corner and how mouse is used to change

Formal Lab Reports - . some personal comments structure first and foremost know what it is to plagiarize don’t do it

Writing Lab - . diction: a and a n. “a” and “an” are often misused. usage depends on sound. use a before words or