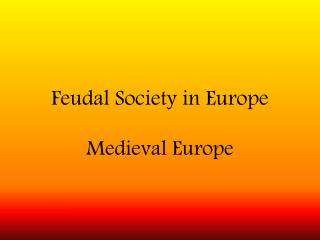 Feudal Society in Europe. Medieval Europe. Why was feudalism necessary?. After the Roman Empire collapsed, Europe had no strong central govt. Cities were much smaller and were no longer economic sites but places to huddle for protection.

Feudalism in Europe - . the color is red. rise of feudalism. from 850 to 950 there were a series of invasions the muslims

Societies of Europe - . u.s. history ms.swearingen. societies of europe. main idea: by 1500, europe was going through a

Development of Feudalism in Europe - . starting with a story. becoming a

Feudalism in Europe - . today’s target. i can… explain why feudalism began in europe. identify characteristics of

Japanese vs. European Feudalism - . similarities. land ownership forms basis of all feudal societies both were fixed

Feudalism - . gps standards . sswh7 the student will analyze european medieval society with regard to culture, politics,

Medieval Europe - . prelude to the modern era . the middle ages. feudal society. collapse of the roman empire. outside

Feudalism in Europe - . the vikings invade from the north . from 800-1000 invasions destroyed the carolingian empire.

Section 2: Feudalism in Europe - Feudalism, a political and economic system based on land-holding and protective

Feudalism - . by : pablo valencia. introduction. feudalism made major changes to european society. it was a social system