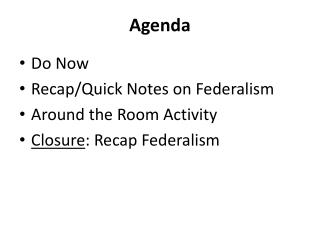 Agenda. Do Now Recap/Quick Notes on Federalism Around the Room Activity Closure : Recap Federalism. Do Now. For each of the following determine what level of government the situation applies too and why . 1.) Your sister just reached the driving age and wants to apply for her license.