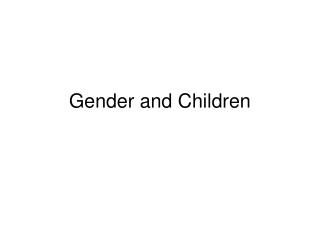 Addressing Gender Stereotypes in children - . by sr. meisie ndebele cotlands. background. the aids epidemic has to a

Understanding Gender and Gender Equality - . some thoughts. “the status of women indicates the character of the

Young Trans or Gender Diverse People The Needs of Gender Variant Children - The university of sydney. young trans or

Gender and Gender Inequality (3/24) - . 1.to what degree is the u.s. characterized by institutional sexism, today?

Health and Gender WHO’s Gender Policy and the importance of gender - In health interventions and research. learning