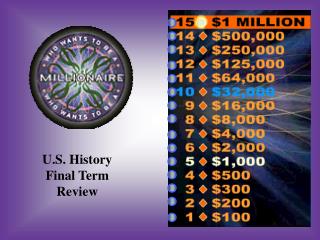 AP World History Review - . 1750-1914 myers. in what century did the atlantic slave trade reach its zenith in terms of

AP World History Review - . 1750-1914. in what century did the atlantic slave trade reach its zenith in terms of numbers

Civics Review - . the term meaning a 2/3 vote can end a filibuster. cloture. what is the term for an appellate court

US History Review - . units 1-5. unit one. ssush1 the student will describe european settlement in north america during