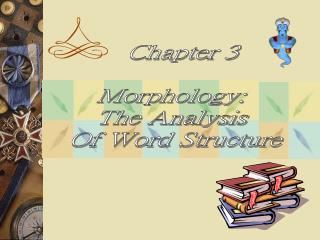 Chapter 3 Morphology: The Analysis Of Word Structure. How to segment this word? Anti/ dis/ establish/ ment/ ari/ an/ ism. “What’s in a name? That which we call a rose By any other name would smell as sweet.” (Shakespeare). 2. Free morphemes: Chapter 3 Morphology - . aims. to get a general idea of some features of word ； to understand word-formation processes;

MORPHOLOGY : THE STRUCTURE OF WORDS

Morphology, Part 3: Word-Formation Processes - . october 1, 2012. some announcements. #1: there will be no office hours

Word Chapter 3 - . creating a cover letter and a resume. objectives. format characters and paragraphs insert and

Chapter 3 Structure of the Atom - . chapter 3 notes. brainteaser. what makes one element different from another? in the

Chapter 3 The Structure of the CMM - . the cmm is a framework representing a path of improvements recommended for

CHAPTER 3 MORPHOLOGY: THE WORDS OF LANGUAGE (71-114) - . powerpoint by don l. f. nilsen to accompany an introduction to