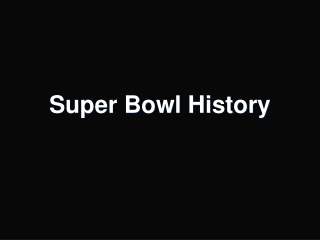 Michael Ornstein - Played a vital role in the victory of saints in super bowl. born in new york and presently living in

Super Bowl Edition D.J. Jarrett February 2, 2014 - . “generosity is not on a list of rules handed down from on high and

Data Analysis Go 49er’s! - . how can we use data to help us better predict future events?. history of team vs. team

Super Similes - . by: caroline l. my dog is as small as a…. bowl of rice. the cat was as soft as…. fluffy pillows. my