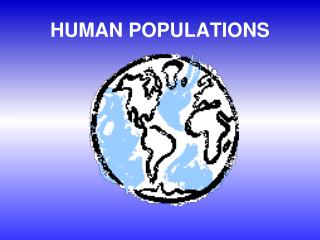 HUMAN POPULATIONS. HUMAN POPULATIONS. Every second, on average, 4-5 children are born somewhere on earth. In that same second, 2 other people die. This difference between births and deaths means a net gain of nearly 2.5 people per second in the world’s population. 9000 people per hour Human - . evolution. what were our ancestors like?. where did we evolve? why big brains? relationships between

Population Genetics and Human Evolution - . chapter 19. gradients of genetic variation in human populations. prior to

Tracking the genetic legacy of past human populations through the grid - . nicolas ray university of geneva &amp;

Chapter 5 Populations - . 5-1 how populations grow. i. characteristics of populations a. geographic distribution- or

8-1 How Populations Change in Size - . page 197. a. what is a population?. 1. set of individuals within a species living

Tracking the genetic legacy of past human populations through the grid - . nicolas ray university of bern / cmpg