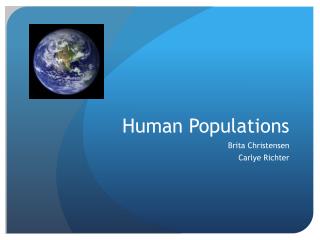 Human Populations. Brita Christensen Carlye Richter. Case Study. Every year, India adds more people to the world’s population than any other country In 2005, India had 1.1 billion people By 2050 India is estimated to have a population of 1.63 billion

DEPARTMENT OF HUMAN SETTLEMENTS - . presentation to the select committee on public service 20 april 2010. aim. the aim of

STATISTICS - . summarizing, visualizing and understanding data. i. populations, variables, and data. populations and

Chapter 11 Corrections: History, Institutions, and Populations - . learning objectives. identify the components of the