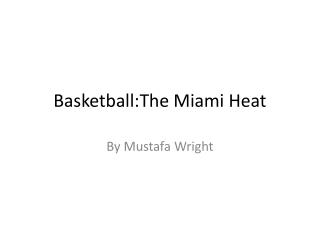 Basketball:The Miami Heat. By Mustafa Wright. Miami Heat:The beginning. The Miami Heat was first established in 1987.The first owner of the Heat was Mickey Arison . Their first coach was Ron Rothstein. Their first arena was the American Airlines Arena. Miami heat first championship 2006. Chapter 2 Principles of Heat - . 建筑外环境. 人体对热湿环境的反应. a good thermal environment is a major

My Hobbies - My name is tony and my favorite hobby is basketball. it is a international professional sport. ... worst of