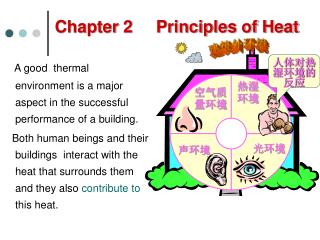 Chapter 2 Principles of Heat. 建筑外环境. 人体对热湿环境的反应. A good thermal environment is a major aspect in the successful performance of a building. Both human beings and their buildings interact with the heat that surrounds them and they also contribute to this heat. 热湿环境. 空气质量环境. 光环境. Heat - . ap physics b chapter 14 notes. heat as energy transfer. heat is the transfer of energy—units calories 1 cal is

Chapter 11 Thermochemistry - Heat and Chemical Change - . 11.1 the flow of energy-heat. things you will learn. you will

and Thermodynamics - Heat. and thermodynamics. designed by miyav. “ heat from the sun is the driving force of life on

HEAT &amp; HEAT TRANSFER - . recall: heat is energy transferred from one object to another energy in transit once

Chapter 4: Principles - . the regulatory foundation. contemporary loac is built on a foundation of core principles these