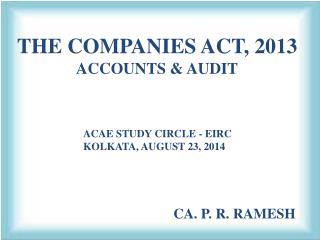 Companies Act 2013 - . why a new companies act ?. the existing law is over half a century old new law helps to

THE COMPANIES ACT, 2013 - . overview: definitions. by ashwani jaiswal. disclaimer. the content of this presentation is