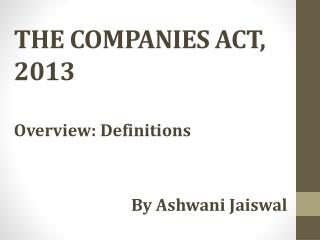 THE COMPANIES ACT, 2013. Overview: Definitions. By Ashwani Jaiswal. Disclaimer. The content of this presentation is meant for informational purposes only. The views expressed and the comments or statements made herein are those of the presenter. Intercorporate Transfers - . a parent company and its subsidiaries often engage in a variety of transactions among

The 4C's of the Conversation Company - In his new book, steven advises companies to become conversation companies. a