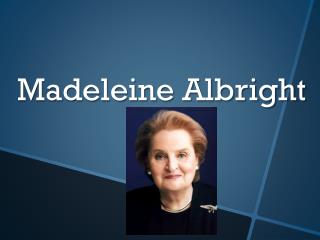 Madeleine Albright . I was born in Smíchov, a town in Prague, Czechoslovakia on May 15, 1937 I was the oldest out of my siblings, I had one brother and one sister, John and Katherine. My father, Josef Korbel, was a Jewish Czech diplomat, and was married to my mother Anna Korbel. Madeleine Leininger - . “caring is the essence of nursing” madeleine leininger. answering her calling…. during her

Madeleine Chéruit - . by: shannon roark. who was she?. she was born in france in the 1880's she was among the foremost

Presented by: Stefanie Albright - Dr. no? texas open meetings act – what can i do?. presented to: capital area suburban

Writing Process Madeleine L’Engle - . inspiration usually comes during work, rather than before it. writing process