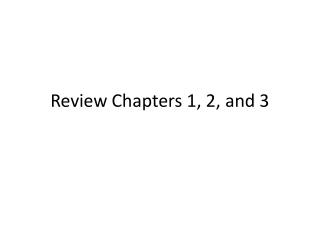 Review Chapters 1, 2, and 3. Physical . Physical properties can be observed without changing the substance into a different substance. Color Shape Mass Density

Chapter 1 Review - . lesson 1. e. a. name all planes in the figure name 3 collinear points. explain how you know they are

Summary of the previous episodes (Chapters 1-5) - . chapter 1. the story begins in 1881, where dr. john watson runs into

The Giver review chapters 1-5 - . how is jonas different from others in his community? what is an assignment? what are 3

Review Chapter 1 - . choose one of the questions below and write it in your journal. write a short paragraph to explain