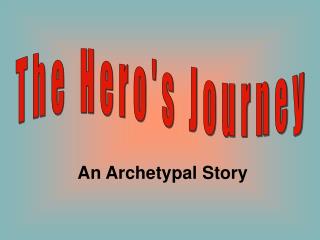 The Hero's Journey. An Archetypal Story. Archetype: A pattern, such as a type of character or type of story, that is repeated in literature. The hero’s journey is one of the oldest story archetypes on the planet. Some say it’s older than the Pyramids…. And Stonehenge….

Archetypes! - . what you never knew that you already know!. archetype. an archetype is from the greek word arkhetupos